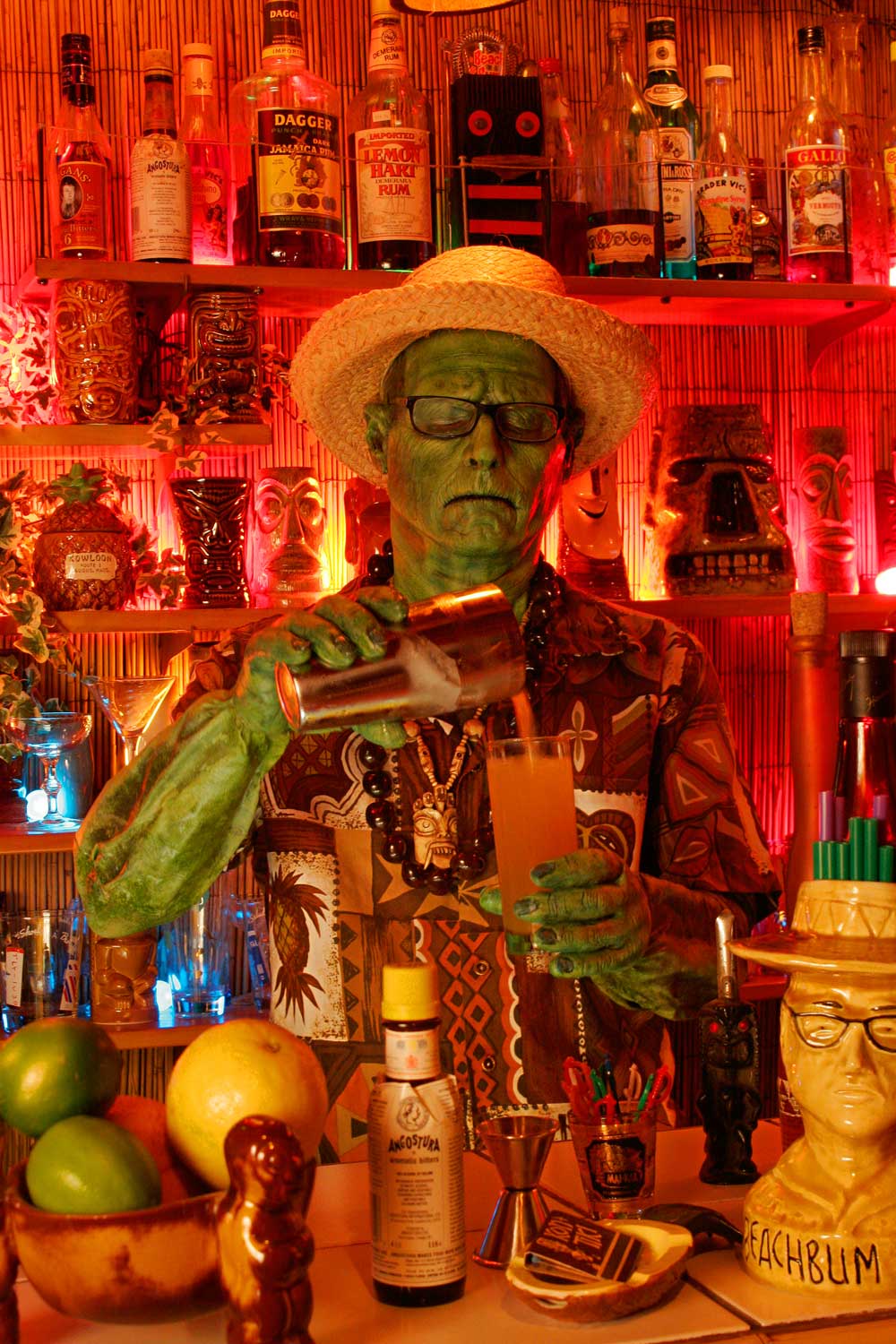 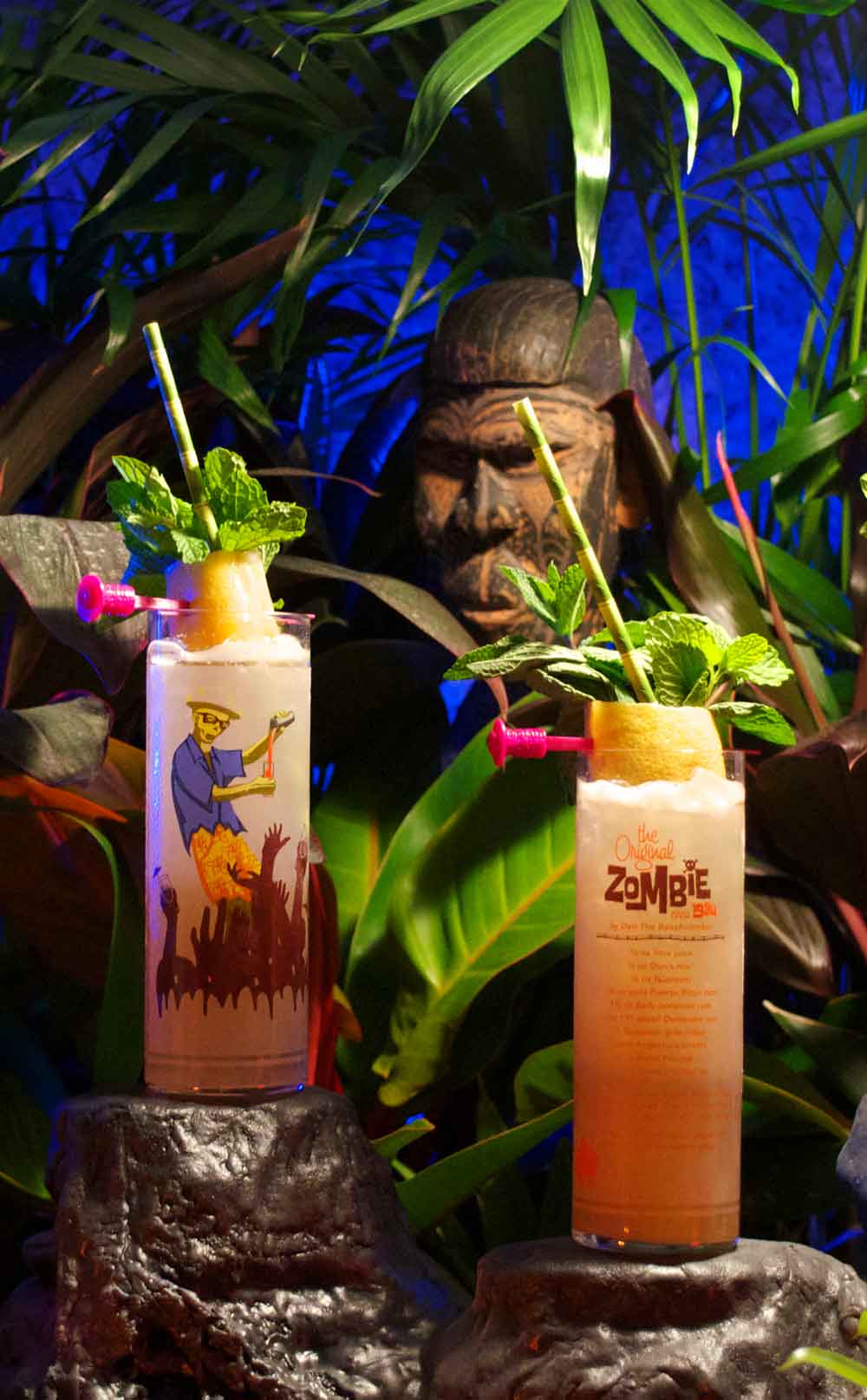 How to Make a Zombie

Until the Mai Tai came along, the Zombie was the world’s most famous faux-tropical drink. It kick-started the whole Tiki craze, and put Don The Beachcomber’s on the map. Donn Beach kept his original 1934 recipe a closely guarded secret — to the point of encoding it. The code numbers corresponded to numbers on bottles in his bar, which had no other identification; the actual contents of the bottles were a complete mystery to the employees who mixed them.

This foiled rival restaurateurs who tried to steal Donn’s drinks by hiring away his bartenders — and forced competing Tiki bars to improvise their own versions of the Zombie, usually long on booze and short on inspiration. Because Donn never revealed his recipe to anyone other than his most trusted staff, over time these inferior Zombie knock-offs became the norm. That’s why when you order a Zombie today, you get the cocktail equivalent of pot luck: whatever juices and syrups happen to be behind the bar that night, spiked with an equally indiscriminate mix of cheap rums. Not even a binge-drinking frat boy would risk his fake I.D. on the result.

In 1994 the Beachbum began a quest to track down Donn’s original Zombie recipe. Ten years and several blind alleys later, he was still none the wiser. But then the gods finally took pity on him. In 2005 their messenger, in the form of Jennifer Santiago, appeared with the drink recipe notebook that her father Dick had kept in a shirt pocket during his 15 years at Don The Beachcomber’s. (See Beachbum Berry’s Sippin’ Safari for Dick’s life story, as well as a ten page chapter about the Zombie.) Several of the notebook’s recipes had been re-worked, re-named, or cut altogether from the Beachcomber’s menu by 1940 — proving that Dick’s notebook dated from the 1930s, possibly 1937, the year he was hired. Which meant that the notebook’s Zombie could very well be the original 1934 version.

How so? For one thing, Dick had marked the recipe “old.” It need only be a mere toddler to have been born in 1934. So here, in all likelihood, was the Big Bang of the Polynesian restaurant craze … the drink that launched a thousand Tiki bars … the Holy Grail … the Golden Fleece … the first Zombie. We were happier than Louis Leakey unearthing Homo habilis in the Olduvai Gorge. Until we tried to make the recipe. Because another thing that pointed to its authenticity was — you guessed it — it was in code. Not all of it, just one inscrutable ingredient: a measly half-ounce of “Don’s Mix.”

O cruel Fate! But there, on the last page of the notebook, scribbled in Dick’s own hand, was a recipe for “New Don’s Mix”: two parts grapefruit juice to one part … “Spices #4″? Another code name!

Bowed but not broken, the Bum asked Mike Buhen of the venerable Tiki-Ti bar if he’d ever heard of Spices #4. Since Mike’s dad Ray was one of the original Beachcomber’s bartenders in 1934, if anyone knew, Mike would. “Ray would go to the Astra Company out in Inglewood to pick up #2 and #4,” Mike told the Bum. “A chemist would open a safe, take out the ingredients, and twirl some knobs in a big mixing machine, filling up a case while Ray waited. Then they’d close up the secret stuff in the safe. Ray took the bottles — marked only #2 and #4 — back to Don The Beachcomber’s.” All well and good, but what did #4 taste like? “I have no idea,” Mike shrugged. “Astra was owned by a guy named John Lancaster, who died of cancer in the ‘60s. The company’s long-gone.”

And so the original Zombie Punch recipe sat, Sphinx-like, the solution to its riddle so close we could almost, well, taste it. Months went by. A year went by. And then the Bum made the acquaintance of a veteran Tiki bartender named Bob Esmino. Did he know what #4 was? “Oh, sure, from John’s old company,” chuckled Bob, who hadn’t thought about the stuff in 40 years. “It was a cinnamon syrup.”

Huzzah! Armed with this last piece of the liquid puzzle, we finally mixed a 1934 Don The Beachcomber’s Zombie Punch. And now you can too.

(Or try this alternate version made not with three rums but one: our new Hamilton Beachbum Berry’s Zombie Rum Blend.)

Donn called his signature drink “a mender of broken dreams.” We think you’ll agree. But proceed with care: Donn himself would serve no more than two to a customer.